I dream of equal rights 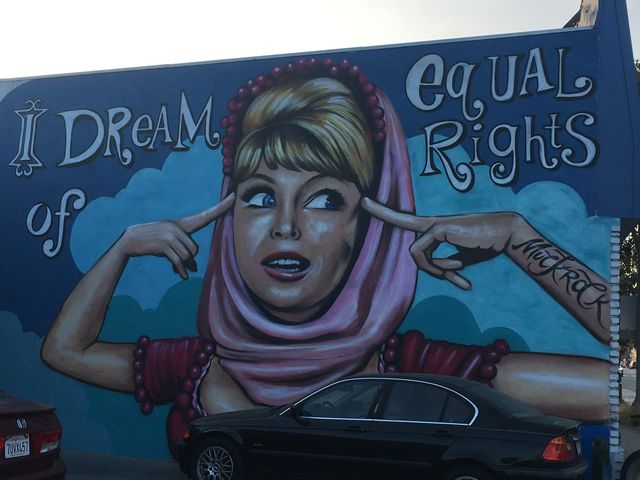 I saw this mural on the side of a building near Venice beach this Summer and couldn’t resist it! Not least because that day my family and I had driven across the mid West from the Grand Canyon to LA. As we drove, we checked out the radio and to my kids’ disappointment (quickly followed by headphones inserted …) we mainly found Talk Radio. You’ll no doubt imagine the kind of “talk” we heard. I have no intention of airing my political views but I almost drove off the interstate when I heard one radio host describe Hiliary Clinton as “that creature”. Such powerful language – language that is almost impossible to believe would be used about a male Presidential candidate.

Many people have asked me lately about my views on the Serena Williams “issue”. Was she rude and a bad sport, and therefore rightly punished as any male in the same situation would, or was she treated differently in her punishment because she reacted emotionally and dared to speak out loudly? Did she jump on the gender bandwagon or take her moment ….. Times Up!?

What the post Weinstein drama has taught us surely is that the debate is everything – by keeping the conversation alive, we continually remind ourselves that others see and experience the world differently to ourselves. That the lenses we see through, the experiences we have had or not had, will necessarily lead us to react and behave in ways that our rational selves would not always endorse. Serena Williams was “at work” that day. Maybe she spoke up forcefully or a little too emotionally ….. for a woman? For a man? For a tennis player? Who knows if she secretly regrets calling out the disparity of treatment between genders in the way she did? The disparity exists of course - whether that is about docking points or receiving reduced prize money.

But these moments in the public eye are critical to keep us talking about what goes on around us – the norms that we fail to question. “Zero tolerance” may look great on paper, a clear benchmark in terms of unfair and unlawful treatment and behaviour, but it is also clear that this benchmark is stifling debate. Many participants in our behaviour sessions talk about being fearful of speaking up. The fear that we are hearing about now though is slightly different. It is not the "victim's" fear but  that of the passive bystander, who is now more observant and aware of past behaviour they may have turned a blind eye to. To what extent will their past inactivity be tolerated today? There is an understandable concern that zero tolerance is not that forgiving!

So I, for one, will keep dreaming of equal rights …. Indeed I did so as I walked into a room to deliver an inclusive leadership workshop at a global bank last week and looked around at the 20 participants, and chuckled to myself, noting I was the only woman in the room ….again! As we say at byrne·dean, it’s just about keeping the conversation alive!

Sexual Harassment at Work - has the line moved?