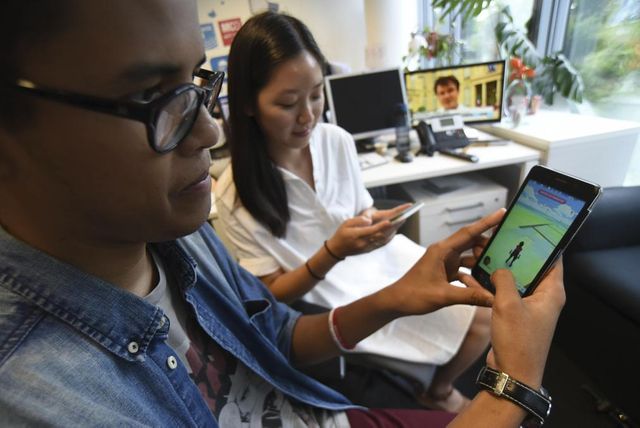 Human resource managers could be facing some headaches over the next few weeks. RECOMMENDED FOR YOU Here's How to Play Pokémon Go How to Save Your Phone's Battery While Playing Pokémon Go Here Are The Best Colleges for Your Money Promoted 9 Out of 10 Homeowners Don't Know These Clever Cleaning Tricks Recommended by There’s nothing like a break from the day-to-day routine at your office. And the sudden, phenomenal popularity of Pokemon Go offers a nice respite. (Yes, you can admit it.) The app, which debuted on July 6, is already bigger than Tinder and is closing in on the same number of daily active users as Twitter.

So. Pokemon Go has arrived in the UK after huge success in the US and New Zealand. It's a craze sweeping the nation. Whilst some say it's great because players have to get off the sofa and into the real world, some are critiquing the game for encouraging obsessive behaviour.

But will it impact productivity in the workplace? The short answer is probably. Already people are tweeting how their 30 minute journey to work took them 90 minutes because they stopped at every 'Poke Stop' on the way and some workplaces are designated 'Poke Gyms' on the games system encouraging players to carry on hunting during working hours. So yes, it is a highly distracting, highly addictive game that is bound to have an impact on workplace productivity. But is this a crisis? I don't think so. As with most crazes, the initial excitement is short-lived and is bound to die down in the not-too distant future.

Of course, employers can remind employees of the internet use policy (which may soon be expanded to cover online gaming in the workplace!). It's also possible that conversations may need to be had to remind people that the basics of turning up for work on time, meeting deadlines and focusing on work during work hours still apply. There may even be one or two more extreme cases where disciplinary action is required (I don't envisage this being commonplace). But there is no need to panic; the large majority of people will be sufficiently self-aware to notice when their performance is being impacted by spending too much time playing Pokemon Go- a gentle word or two is likely to suffice. This is a good example of clear, constructive and timely communication being the simplest way to resolve any potential problems. So if you are concerned about any Pokemon Go obsessives, just have a quiet word with them (that's assuming they don't inadvertently trip over you whilst catching Pokemon!)

Whose day is it today?
More articles by
Richard Thompson