"The lighter side of disability"? 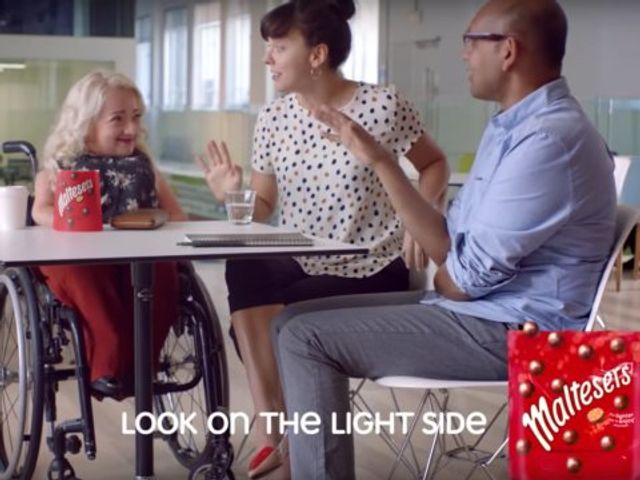 Many people are championing Mars and their Maltesers (!) for their three new adverts staring various actresses with physical disabilities. Quite right too. But let's not forget the role of Channel 4. Far be it from me to rave about them in the light of the Great British Bake Off debate, but credit where it is due - they stumped up £1 million to pay for this campaign with Mars winning the competition. Channel 4 have once again demonstrated that their 360 Diversity Charter isn't just a piece of paper.

In 2015 Channel 4 committed to some bold goals and they recognised that these goals would remain mere aspirations "unless we hold ourselves to account and allow others to hold us to account too." In January this year they published One Year On and transparently set out their successes and learnings. These adverts illustrate their commitment to ensuring that the media reflects society, here bolstering their targets in terms of actors with disabilities being normal, and not unusual. Much of their Charter concerns their internal working environment - they know they have a long way to go in terms of redressing the in-balances particularly within leadership but by emphatically setting targets, by actively measuring success and from inviting and encouraging anyone who is looking to hold them to account, Channel 4 is driving cultural change internally and externally.

I am lucky to work with many clients who not only desire cultural change but who actively promote it. But there are perhaps a handful of them who are ready across all levels of their organisation to fully engage in a transformative diversity and inclusion strategy. Some organisations focus on board level, whilst others at senior or middle management and others still at feeding the pipeline or entry level. But there can be no half measures when you say you are making changes. As Channel 4 says, you have to "put [your] money where [your] mouth is". Whilst I appreciate that there continues to be a massive strain on internal budgets, let's be clear, a robust and sustainable D&I strategy isn't a nice to have - it is a commercial imperative. Whilst, it may not be possible to show a causal link in the relationship between diversity and performance, the likes of McKinsey & Company and Credit Suisse (not generally known for their soft and fluffy aura) have demonstrated time and time again the financial returns available to those organisations who find themselves in the top quartile for gender and racial / ethnic diversity. Companies which continue to pick their talent from shallow pools will continue to get small catches.

The Malteser adverts showing "the lighter side of disability" may be amusing and poignant. Against the backdrop of the paralympics, they will have a ready and willing audience too - right now that is. But Channel 4 has remembered when you commit to a D&I strategy, everybody is looking at you all the time - your staff, your clients, your suppliers and the public at large. At a recent D&I forum I attended, one member described how initiatives had been tried before and failed - there was no traction and insufficient stakeholder support. The desire for change limped on as the discussions dried up. If you are committing to a transformational change then you need to engage with everyone who is looking at you in any way you can.

So what's an employee "experience"?

Should we pay whistleblowers?
More articles by
Victoria Lewis